So it was on a VERY cold December 15th morning in 2005, we arrived blurry eyed from the over night drive, the car still packed to the roof, at the office of the Notaire. Our friendly agent was there to meet us and act as our interpreter as we still didn’t speak enough fluent French although we were trying our best as quickly as possible.

After many “Sacre blue’s” and the word “merde” being banded about far too often for our liking, apparently down to a description of the properties being wrong. Then what seemed like a thousand signatures by everyone in the room, some 4 hours later… we were the proud new owners of Le Chateau de la Rivière.

Now time to get down there and open it all up, fire up the antique boiler and get it all ready for 11 family members coming over for Xmas.  The previous owners had left in September to return to Malaysia, so they had been shut up for the last 3 months.

As promised and pre arranged by the previous owners, their plumber came along to show us how the old boiler worked. Now I realise this sounds a bit excessive, a boiler is just a boiler, turn it on and fire it up.!! Well that was effectively what the plumber did.  The old beast flared into life and hot water was soon coming out the taps. Nothing in the radiators, just the taps… Is now a good time to say that with this boiler came a hand drawn diagram (labelled in a mix of French and German) which went some-way to explain what the 38 taps and 24 valves did, or supposed to do. 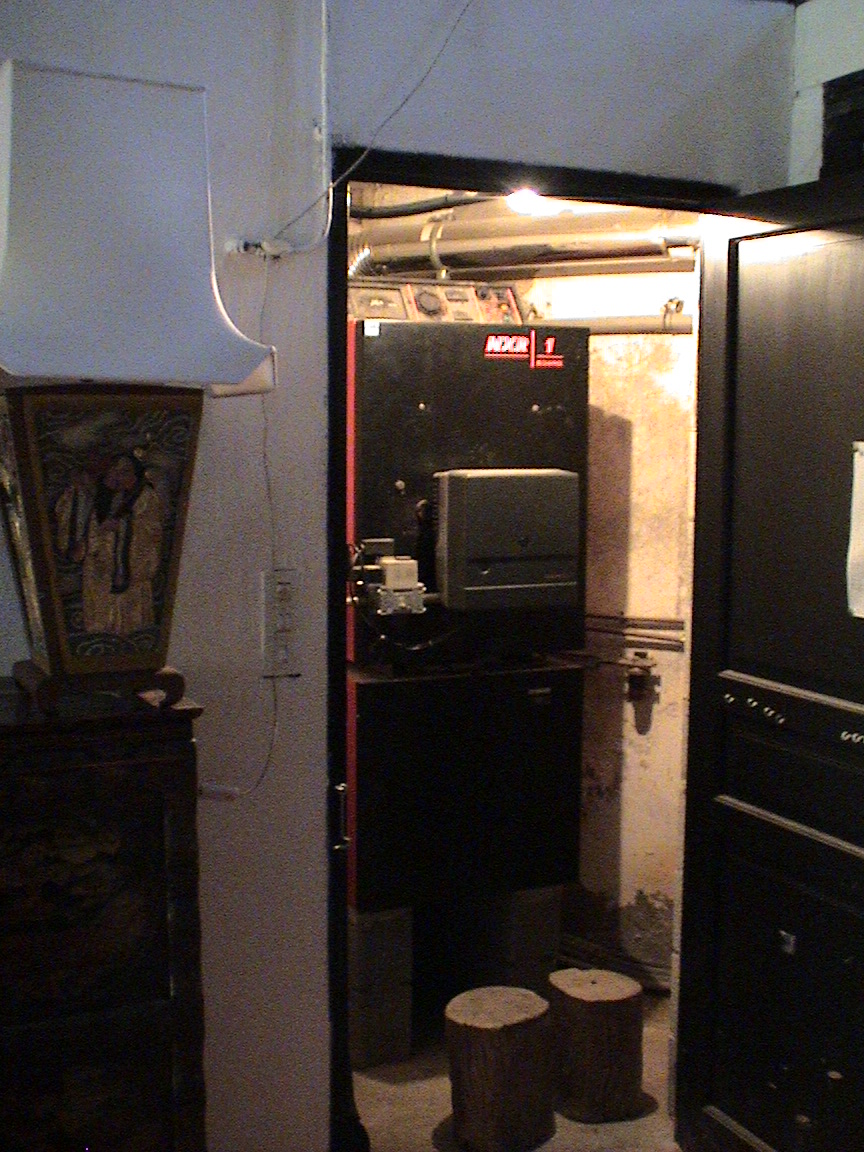 When it was fired up you could see the Euros flying out of the roof!!!!

To say the houses were rather chilly inside would be a slight under-statement, the Olive Oil in the kitchen was a frozen solid lump.

It was apparent that while the boiler was up and running, none of the radiators had been turned on in the boiler room.  So after lots of trail and error and in day 2, we finally managed to get some heat coming through most of the radiators. Pretty sure at some point we were actually pumping hot water out to the swimming pool which was very frozen at the time….

We soon realised we needed some sort of immediate heating, so our first real challenge was upon us. Lets buys a Calor Gas fire, how difficult is that going to be?

We know you have to register things like this to enable you to exchange the gas bottles, but what we didn’t expect was the fact the fire does not come with any connections. And indeed we did not even know what type of gas we had to use…  So we had the fire, but no bottle. We finally worked out with a mixture of bumbled French questions and drawings, and looking at other examples, a connection kit and the bottle to match… Yipee we had some heat that we could see and feel… Although by now with the boiler on 24/7 the inside was finally starting to thaw out a bit…

Just in time for the family gathering to start arriving, at least we could put them all up in a little bit of warmth..

The next problem to over come was how to cook Xmas lunch when only having a small gas bottled oven and a couple of electric grills? Lots of intuition and working across 2 kitchens and Xmas was accomplished very well. Think they all had a great time. !!

It was only as the family started drifting back home and we were left with a few days on our own before the next group arrived, that we sat down and suddenly realised the magnitude of what we have just taken on. We soon realised that Winter lets are not really practical unless they cover the whole Winter period, as heating these houses will not be cheap over the 3 months or so they will need it. But we had no doubts what-so-ever that we had done the right thing, and now had to work on our 5 year plan.

Posted in Our Story.