So what was it that happened?

Pull up a sandbag, or lots of them please…..

Our first full year of running holiday lets had gone well. We had a couple that lived near by that were our managers and dealt with everything pretty well. Unfortunately they decided that the finances just wouldn’t add up and had accepted a full-time job in Toulouse, so could no longer be our managers.

So we were on the look-out for new managers. The word was out and thankfully we soon got a recommendation for another couple that were also near-by.  This all sounded great as it would actually be 2 couples, meaning 4 people to share the load. And as you can imagine there is a lot of hard work involved in keeping this all in pristine condition. So new contract drawn up and things were ticking along nicely towards the opening up for the new season………. Until a few days before we had to return to the UK, the bombshell fell on us that 2 of them wanted to pull out.  After long talks and much stress, we were left with just the 2 who were happy to take it on board. Thankfully Jane and David have been our rock of strength, and we have never looked back. When you read about the things they have had to deal with, you can understand how much gratitude we owe them both.

Did I say Pull Up a Sandbag? Well the irony is just that. FLOODS… Yes we have had a few.

We were aware that the river next to us had very occasionally burst its banks resulting in the gardens being flooded, we are on a low risk flood plain, as you would expect being next to a river, albeit a very quiet stream normally… 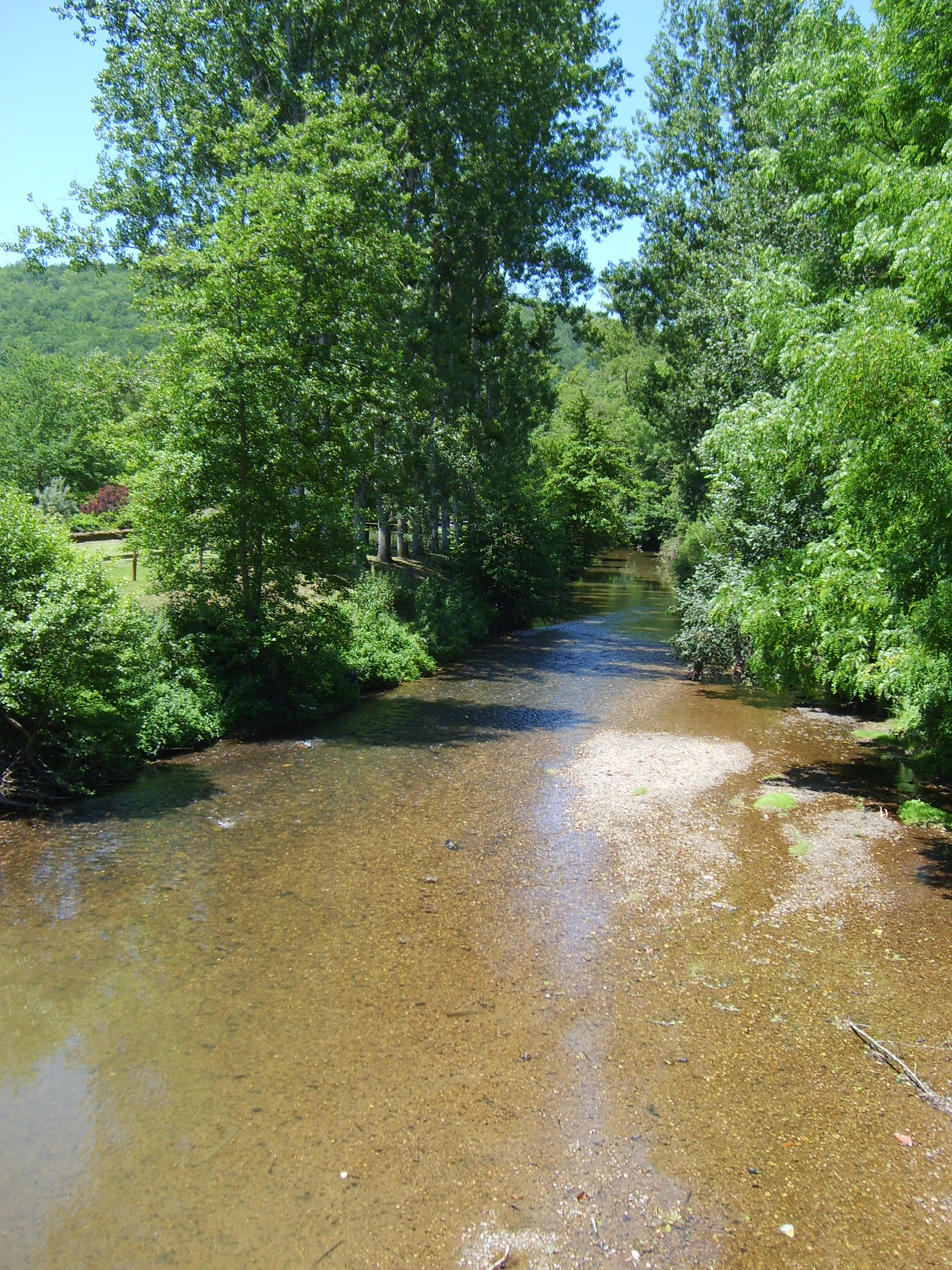 So we were not that surprised when we found out the river had risen after a very long period of intensive rain. We are talking about 4 to 5 inches a day for 5 days solid…. A lot of rain. What really didn’t help us was the fact that there is a huge lake at the top of the valley that is used for water sports and is the main water supply for the region. The management of this lake was poor to say the least… They decided that with all this rainfall, they needed to open the ‘barrage’  (flood gates) so with a river already at full capacity, they added millions and millions of tonnes of extra water to it…. No wonder we got flooded….

It’s OK though because they have the decency to call the village Marie to let him know they have opened the flood gates… So we had about 10 minutes notice. What they don’t tell you is when they will close the gates so you know the water will not rise any further…

Thankfully just the gardens were under water this time. However we had last autumn planted over 2000 spring bulbs and over 200 lavender bushes to make the gardens beautiful during the spring months. We lost the lot. Well not quite, think we still have 2 alliums that managed to survive.

Over the next few years this became a regular thing. Every Winter usually in early Feb or March we got flooded. In fact over the next 3 years we were flooded a total of 9 times. All but one was down to the ‘barrage’ being opened during the heaviest periods of rain… But there is good news.

After a really bad one where we were hit by some really bad weather, hurricane force winds, lightning strikes, torrential rainfall, and the lake being emptied, which not only tore down trees, knocked down walls, smashed roof tiles, we did actually have major flooding, it was bad enough to flood both houses and the swimming pool resembled a mud pit.  Thankfully Jane and David were there for us all the time. Their devastation was clear to see too, they had worked so hard on everything to make it perfect for the coming season, and it was all washed away in a matter of a few hours. This time we managed to get a ‘Catastophe de Nature’ declared and so the insurance came into its own.  Although did not cover most of the garden damage, but did allow us to re line the pool.

no images were found

Well that was the final one from the river management aspect. They have now done lots of work over the full length of the river to improve flow rates and to stop areas of back-up. And most importantly they now control the lake, so that the level is kept well below the flood alert before any major weather systems come in…

We have also since invested in 200 filled sand bags ready to go,  and flood gates for every entry point to all 3 houses. Over £2000 well spent? Well we don’t know as we have never had another incident to test them thankfully…. and to be honest nor do we.. We are happy to know they are there if we need them.

We have had one other major flood…. This time from inside. We had long term winter residents and during a really cold snap just as they were away for the day, the main water pipe that runs through the loft on the dividing wall of the 2 main houses burst. It was not noticed for a very long time and by the time the guests returned the houses were saturated, so much so that they were not habitable. Ceilings had collapsed, plaster had come away from the walls tiles lifted, the electrics were shot.  It was apparent that this was real major damage and was not just a case of a big clean up. Again, who were there in the thick of it for us?… Jane and David. We went over as soon as we could to assess where we would go from this disaster. The insurance assessors where quick to react, and soon had builders coming round with de-humidifiers going on full blast for several months before the rebuilding could start.

5 months later, we were back in business and welcoming our first guests for the season.  But we had had enough. We could not take it any more. The stress of all this had got too much, along with Janine being made redundant while recovering from major surgery, resulted in us having a major re-think. We could not longer afford to keep things going, and the rental income was nowhere near being enough to cover costs.

We still loved it here, but the love was now being tainted with too many tears, and financial worries. We decided that upon completion of the repairs we would sell up. So the Chateau went up for sale. After 7 years of our 5 year plan we decided, we had to give up our dreams.

So where did it go next?

Find out in the next chapter.

So there we were, the new owners, so many ideas of what we can do and what we want to do. Now to start turning those ideas into reality.

First thing and most important was to get it known to the world that we are now in business, so after agreeing a name and buying the Domain names, and with help from some friends the website was born. www.french-escapes.com (and .co.uk) became a reality. But how do we get it out into the big wide world of search engines. Easy answer was to get advertising in place with the big hitters of holiday renting. Taking on board something we learnt on a ‘Gite Management’ course we did last year, we decided to hit the road with Chez Nous. They are the biggest (at the time) and have proved to be the most successful in getting bookings. We had a few others that we soon dropped as they did not perform at all.

We had drawn up business plans for what we thought was every possible scenario. It’s amazing that at the time we had a “worst case” plan done on the Euro exchange rate falling to an unprecedented 1.40.  We were working around the 1.55 rate at the time.

So with what appeared to be a reasonable first year for bookings we decided that our 5 year plan was on the cards. This plan was to be living in La Grange running the other 2 houses as guest homes, possibly all year round. We worked out that we would be able to clear the vast majority of the mortgage within those 5 years with the selling of our UK home adding to the pot. That we would be able to secure enough summer rentals to see us survive the year. Then if we had a really good year we could then start making the improvements and renovations that are still needed.

Without going into details, as it is a full story on its own, lets just say that the best laid plans and all that….  Well the 5 year plan never got off the drawing board really.  The following years proved to be as equally rewarding as they were devastating…

Remote management is stressful believe us.